In a world — say it in “the voice” — in a world, where we attach colors to days of the week (Black Friday, Black Monday, Blue Monday, etc.), when you look into the world of professional wrestling, this phenomenon can be found referring to the day of July 14, 1984, nicknamed Black Saturday.  On that July evening, Vince McMahon’s World Wrestling Federation took over the time slot on Superstation WTBS, typically the home station for Georgia Championship Wrestling’s (GCW) flagship weekly program, World Championship Wrestling, for 12 years. Why a big deal, you ask? Well, when thinking about the infamous Monday Night Wars, this occurrence was its genesis; McMahon’s purchase of the time-slot led to a longstanding rivalry between himself and WTBS owner Ted Turner, resulted in Turner’s purchase of Jim Crockett Promotions (formally GCW) and turning it into his own promotion, World Championship Wrestling.

END_OF_DOCUMENT_TOKEN_TO_BE_REPLACED 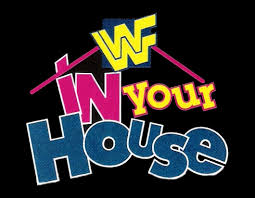 You can usually depend on the huge Vault at WWE headquarters to offer some content to tickle the fond pro wrestling memories of fans of WWE, WCW, ECW, AWA, WCCW, and more event of wrestling’s past.  Recently, WWEDVDNews.com confirmed that WWE will be releasing a new DVD and Blu-Ray set called the “Best of In Your House” on April 30th. Read the official synopsis after the break. END_OF_DOCUMENT_TOKEN_TO_BE_REPLACED

There’s  a special moment in professional wrestling when the fans lose their minds when they see a wrestler from Promotion A suddenly show up at a show hosted by Promotion B.  Smokey Mountain Wrestling’s co-founder and owner Jim Cornette signed a working agreement with the World Wrestling Federation to trade talent, manage and serve as an on-air talent for that company to become a financially successful independent promotion. In match below (after the break), WWF Intercontinental Champion “The Heartbreak Kid” Shawn Michaels defends the title against “The Nature Boy” Buddy Landell at the SMW Super Bowl of Wrestling event, on August 4th, 1995 at the Civic Center in Knoxville, Tennessee.  Smokey Mountain Wrestling operated from October 1991 to December 1995, and though the promotion was relatively short-lived, it was held in high-regard for the quality of the matches, talent, and traditional in-ring and storyline style.  Watch the entire match by clicking here ==>   END_OF_DOCUMENT_TOKEN_TO_BE_REPLACED One of favorite film genres are documentaries, and one of those movies is Barry W. Blaustein’s 1999 project Beyond the Mat.  I remember seeing commercials for this film while watching WWF Shotgun Saturday night (remember that, fellow wrestling fans) and anticipating its release.  I would later be gifted the VHS  release of the film as a Christmas gift from my parents in 2001 and watched it non-stop for several weeks.  Beyond the Mat is by far one of my favorite professional wrestling documentaries (next to Wrestling with Shadows and The Rise & Fall of ECW) of all time, and one that any fan of pro wrestling and/or documentaries should take the time and watch.   END_OF_DOCUMENT_TOKEN_TO_BE_REPLACED Soon after The Undertaker made his World Wrestling Federation debut at the Survivor Series in 1990, he set his cross-hairs on the World Wrestling Federation Championship and it’s then-title holder, Hulk Hogan. Everything initially began on November 16, 1991, when Ric Flair and The Undertaker attacked Hulk Hogan on the set of Paul Bearer’s Funeral Parlor interview show, but later Randy Savage and Roddy Piper fought off both Undertaker and Flair to protect Hogan. This would culminate in Hogan facing off with Undertaker for the championship at the 1991 Survivor Series, coined as “The Gravest Challenge.”  Check out more about the match (including a video) and the fallout after the break.   END_OF_DOCUMENT_TOKEN_TO_BE_REPLACED