I hope you can see it; it should be the easiest Where’s Waldo puzzle you’ve ever come across (remember Waldo kids?). The American Institute of Architects (remember them) conducted an interview with famed architect Frank Gehry — the recipient of the 2012 25-Year Award and architect of the Dwight D. Eisenhower Memorial project — to talk about his unorthodox residence in Santa Monica that has hugely impacted and influenced architectural practice and theory in the last 30+ years.  Plus, there’s a story that the Homeowner’s Association forced Gehry to put a chain link fence on the property, so he did; by incorporating it INTO the house itself.  Now that’s what we, on the internet, call “pwnage.”  Check out more about the house (and a video; ooh-la-la) after the break.

END_OF_DOCUMENT_TOKEN_TO_BE_REPLACED

Musician Moby is best known as, well, a musician, but he has recently been receiving a lot of attention for his architecture blog on Tumblr that is centered around his fascination with the architecture of Los Angeles, California . In an interview conducted by 1883 Magazine, Moby talks about his opinions on some his personal favorites buildings, and he starts off with the Ennis House by Frank Lloyd Wright.  Moby depicts that house as an ancient Incan spaceship from 100,000 years ago; even though it is recognized as being an example of the Mayan Revival style of architecture from the 1920’s to 30’s, but that’s ok.  Check out a picture of the Ennis House and a preview of the entire interview after the break.

END_OF_DOCUMENT_TOKEN_TO_BE_REPLACED

Architect Frank Gehry has now left his stamp in the city-state of Hong Kong, after doing so in Los Angeles, New York, Prague, Bilbao.  The recently-completed Opus Hong Kong is a 12-story residential tower, and the architect’s first in Asia.

END_OF_DOCUMENT_TOKEN_TO_BE_REPLACED 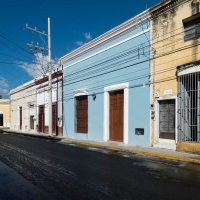