Le sigh. Now, I know that EVERY SINGLE YEAR there are going to be gripes and complaints about who “needs to be”, “should be” and “deserves to be” in the WWE Hall of Fame. Remember the multiple online arguments about Randy Savage getting inducted? Or even Bruno Sammartino? Or J-E-Double F, J-A-Double R-E-Double T?!? Now, all three of those guys made it to the Hall of Fame, but one omission that grinds my gears (especially due to the constant rumors and false-positive leaks/reports) is the lack of the late-Bam Bam Bigelow’s absence from the WWE Hall of Fame.

The man also known as “The Beast from the East” will surely have his Hall of Fame moment in the near future. However, it appeared at first that Bigelow might get the nod this year, but it was not to be. Still, I was very happy and pleased to see Jeff Jarrett, Hillbilly Jim and Mark Henry get inducted this past Saturday. Bigelow’s career accomplishments are NOTHING to sneeze at. He is a former ECW World Heavyweight Champion, a finalist of the first (pay-per-view edition of) King of the Ring tournament — losing to Bret Hart — and headlined WrestleMania XI with a decent match with Football legend Lawrence Taylor. He’s also considered to be one most deceptively athletic super-heavyweight wrestlers of all time. 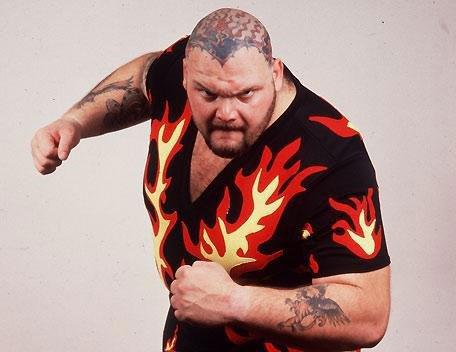 Last December, BodySlam.net’s managing editor Brad Shepard tweeted a list of names that were going to the Hall of Fame in 2018:

EXCLUSIVE: The 2018 class of the WWE Hall of Fame is currently as follows:

I’m very hopeful that in 2019, Bigelow will take his rightful place in the WWE Hall of Fame. Mainly due to the fact that next year, WrestleMania 35 will take place in New Jersey (Bigelow’s home state) it highly probable that he will be a part of that year’s ceremony. Here’s to hoping…