You may have seen Ron Funches on NBC’s Undateable or on Comedy Central’s @midnight, and if you’ve ever seen/heard his stand-up you’d know that he’s a longtime fan of  professional wrestling. He even has a great bit about how to handle people who tell him wrestling is fake (because OF COURSE the fans already know it’s scripted and predetermined), and, to be hones, it’s a really good retort for keeping the “Negative Nancys” and those drunk off “haterade” at bay.  However, Ron is taking his love for the medium to an whole ‘nutha level by actually taking pro wrestling classes, and he explains on Conan, (in the above video) why he’s doing it.

Actually, comedians wanting to be pro wrestlers isn’t a new concept; it’s similar to athletes who aspire to be rappers. Plus, if you’ve ever seen stand-up comedy clips on YouTube showing comedians “destroys hecklers”, that is essentially the stand-up comedy version of a “shoot/real interview”. Retired wrestlers like Mick Foley and Jake “The Snake” Roberts replaced the in-ring action for performing shows in comedy theaters, and current WWE Superstar Dolph Ziggler is already a stand-up comedian (even Jimmy Uso has given it a shot). Here’s hoping Kevin Owens might do the same thing in the years down the line. 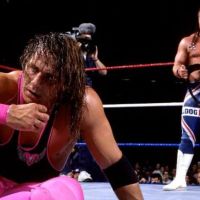