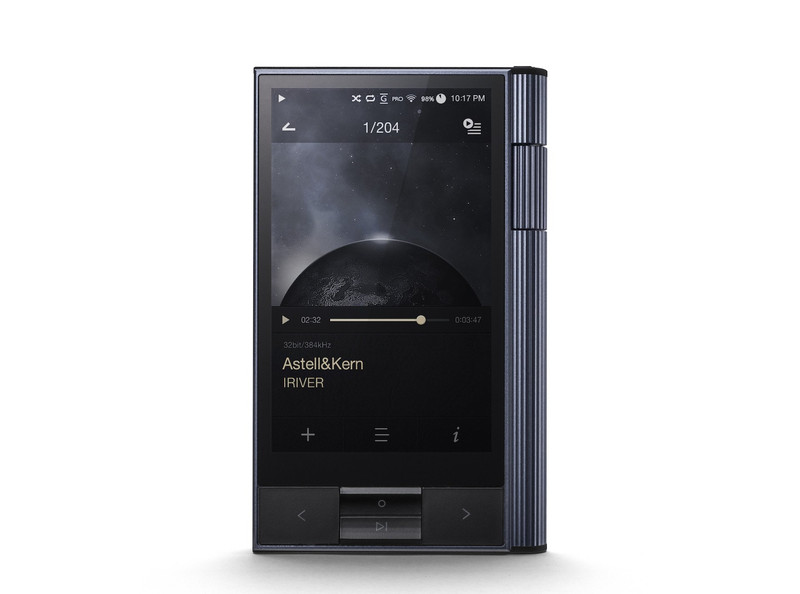 Astell & Kern’s newest portable music player (or PMP with no “I”; sorry 50) — the $999 Kann — is out now, and for a portable media player, it has some pretty impressive modern-day inclusions.  This fact is interesting since most high-end portable music players are slow to included extra bells-and-whistles, if at all.  Not only is the Kann huge — it’s just over an inch thick (25.6mm) and weighs over half a pound (278.7g) — it includes a massive 6000mAh battery (for a supposed battery life of 14 hours), an integrated powered headphone amp, and both micro SD and full-size SD card slots. Keep in mind, this thing IS ONE-THOUSAND DOLLARS. Some other technical features of the Kann include a pair of unbalanced 3.5mm and balanced 2.5mm headphone/line out audio jacks , 64GB of internal storage, and it can charge and transfer data over USB-C. As far as audio files go, Astell & Kern state that the Kann can handle playback of up to 32-bit/384kHz for PCM audio, up to DSD256 (11.2mHz) for DSD audio, and supports aptX HD Bluetooth codecs. This sounds like it would be worth it for audiophiles, plus Astell & Kern are sweetening the deal for early preorders with a free 256GB memory card. In case you’ve forgotten, like most — if not all – of Astell & Kern’s products, the Kann isn’t cheap at $999 dollars, especially since your average smartphone can perform the similar basic task of playing music while you’re on the go in a much cheaper, smaller and more versatile way. I use my Google Pixel XL for that task, plus the Korean edition of the LG G6 costs less than the single-purpose Kann, but ALSO FEATURES an integrated quad-DAC for improved sound quality. But hey, if you’ve got the paper and you’re all about perfect audio fidelity, I’d recommend you give this a shot.