Apparently Netflix can’t stand to limit themselves to only commissioning award-winning programming and movies; they just HAD to attempt to dip their fingers into creating an interactive media project, i.e., create a video game.  A dedicated group of Netflix employees used some of their time to building this fun little projects, like the “The Swtich” (NOT THIS ONE) — a button that can automatically dims the lights, turns on your phone’s Do Not Disturb feature for long episodes of binge-streaming — but this one’s all about gaming. The game is called Netflix Infinite Runner, which is exactly as it sounds, is an endless running game that features the most popular characters from four popular Netflix original shows: Narcos, Marco Polo, Orange is the New Black and Stranger Things. 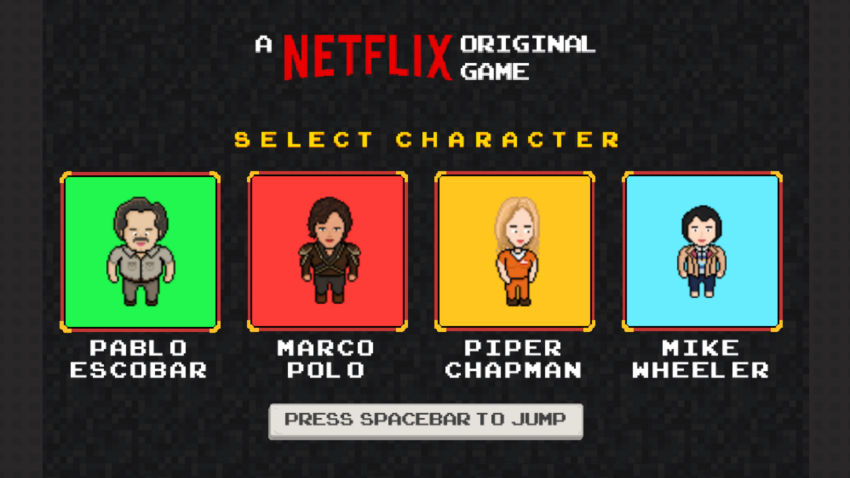 Each level in this endless runner takes place in the world of the show in question and a low-res version of that show’s theme, for example, you’ll jump through the jungles of Columbia with Pablo Escobar (Narcos), outrun the Demogorgon through the Hawkins National Laboratory as Mike Wheeler (Stranger Things) and avoid prison guards as Piper Chapman (Orange Is The New Black).  This game shouldn’t scare off novices, as it’s very basic; jumping isn’t super responsive and the hitboxes for non-playing characters are a much bigger than necessary. If you’ve got some minutes spare and want to give Netflix’s new endless-runner/side-scroller the good old college try, give it a go here!