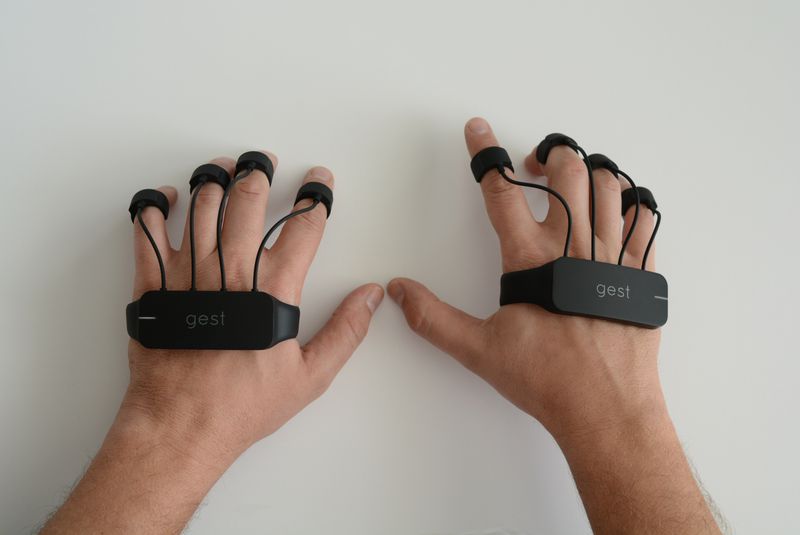 Gest, pronounced “jest” and developed startup Apotact Labs, is a lightweight adjustable black strap that fits around your palm, attached by wires to four small bands that clip onto your fingers. Through the combination of accelerometers, gyroscopes, and magnetometers (like your smartphone), it will figure out the relative positions of your fingers and transmit them to a computer or mobile device over Bluetooth. The Gest’s battery lasts longer than the Leap Motion (since it doesn’t have to collect and analyze the huge amount of data), responds faster, and doesn’t require a separate camera

Apotact Labs CEO and co-founder Mike Pfister describes the Gest as motion control’s answer to the tried-and-true mouse and keyboard set-up. At launch, it’ll work with Photoshop, supporting gestures to adjust control sliders, add layers, and change brush sizes. The Gest is aimed at potential customers who typically use a stylus and don’t want to put it down to type or click through a menu; instead they’d have the stylus in their dominant hand while wearing a Gest on the other. Another realm for the Gest’s potential is with virtual reality devices as a controller, something currently lacking a standard in that area — save for the standard computer keyboard. If you want to go whole-hog and Minority Report style, you can put a Gest on each hand and “air type” using the device’s motion tracker and the aid of a predictive typing tool.

Now, before we get ahead of ourselves, the Gest is not not meant to perfectly recreate the way our hand moves around; it simply captures our hand’s complex gestures and assigns them to to specific computer controls. Also, there’s no thumb clip, as the project’s designers say that they can infer a lot of the thumb’s motion based on how your palm moves. Gest is aiming to ship to its Kickstarter backers in November of 2016 — should it achieve its $100,000 funding goal — with a “early bird” funding option allowing backers to buy a single Gest for $99 (rather than the final price of $199), then pick whether they want a right-handed or left-handed model.