Since today is Christmas, I recognized that there is no wrestler is more Christmas-sy than good old Cactus Jack/Mankind/Dude Love himself, Mick Foley. He’s worn Santa-themed attire for 350 straight days to promote his documentary I Am Santa Claus, recorded a Christmas album with Shooter Jennings and shows up on Monday Night RAW to sell WWE merchandise in a full Santa costume alongside his daughter Noelle (see what he and his wife did there) dressed as an elf.

On his most recent visit to “The Daily Show with Jon Stewart,” Foley continued that trend by wearing a frilly Santa shirt and Santa boots. He was there to talk about attending fruitcake eating competitions, the proposed/attempted boycott of him by the League Of Santas (or whatever that dark, shadowy organization is called) and why we should have an appreciation for the “men who wear the red suit.”

It’s not as “wrestling-related” as his first appearance with John Oliver, but more Mick Foley on your TV’s always a good thing. 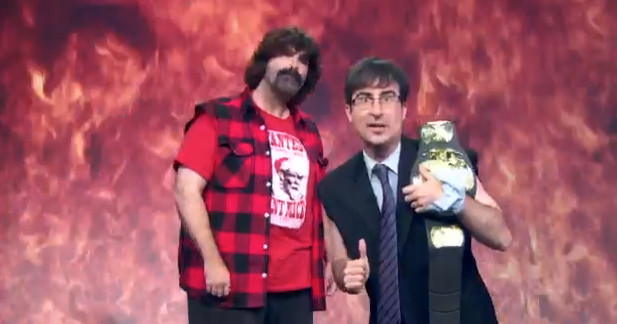