I’ve been playing the Mortal Kombat games for well over 20 years now, and among all the times I’ve caused my opponents to spill gallons of blood, ripped out a fighter’s head and spine as Sub-Zero (my favorite character, or “Kombatant”), or set my adversary ablaze as Scorpion, they just keep on coming back for another round for kombat (intention misspell because “combat” is lame; “KOMBAT” is where it’s at). Also fascinated on this aspect of the fighting game series, the guys over at The Warp Zone produced a video to provide us with a look at the men behind the fighters’ de-mutilation for future and upcoming bouts.

For the uninitiated, The Warp Zone are a nerdy sketch comedy, gaming, and music video-creating bunch brought to us by five loveable dudes: Davis, Schroeder, Ryan, Fish, and Odom.  After viewing the video above, you would have to consider that in a less violent fighting game like Street Fighter, it would be easier to imagine Ryu or Ken heading off to the sidelines for a few of days to lick their wounds. Maybe even take a day off to the spa. However, no bed rest or spa day can replace a ripped out spine courtesy of Sub-Zero.  Because science.  But then again, maybe so; because video games. 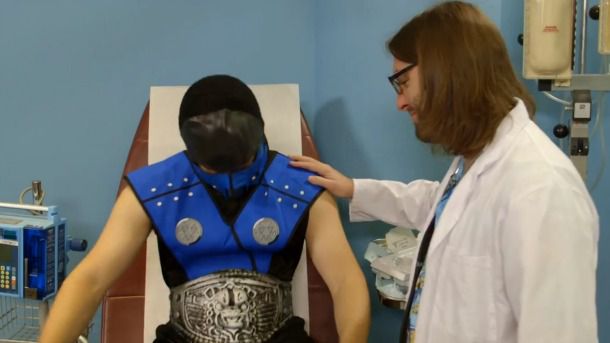 Did I mention Sub-Zero is my FAVORITE?!?!