Back when Windows 95 came out, it was an excellent operating system for a varied amount of task, though mine centered around typing reports for school and playing PC games (like the awesome Torin’s Passage). However, as time passed by, we now use Windows 7, 8, 8.1, and await the arrival of Windows 10, as Windows 95 has now become just a memory. Or at least it did until this interesting hack with Android wearable tech. 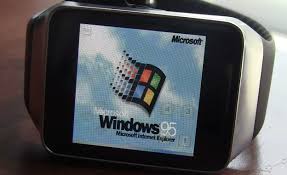 Corbin Davenport is a 16-year-old web developer who — other than being just a tiny twinkle in our eyes at the initial release of Windows 95 — hacked his Android Wear to run Windows 95. Davenport was able to figured out a way to pull up the vintage smart screen on his Android Wear using emulator software called aDosBox. seeing an program that was originally a full-fledged computer operating system like Windows 95 is essentially the majority of the mass of an iceberg.  This is because Davenport’s prior hacking efforts involved putting both Doom and Minecraft on Android Wear.

Granted that there really isn’t a productive reason as to why you’d want to load and boot up a desktop operating system that debuted twenty years ago onto a Samsung Galaxy Gear smartwatch with a 1.63-inch display. But hey, the true reason for doing it is to say that you can! Thanks to emulator software available for Android, this type of experimental technological mish-mashes have become possible.