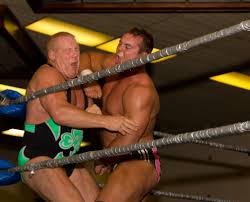 In pro wrestling, there’s an art in delivering strikes that involves finding the balance between a complete non-contact whiff and a broken jaw from a stiff punch. Punches and kicks need to be made with the right amount of contact to add excitement to a match, since pro wrestling is inherently theater, not combat. Often, the wrestlers ARE (in fact) hitting each other, just not at full strength; while the blows are glancing, they’re not concussive. Long story short on wrestling, the violence is restrained but not non-existent.

It’s EXACTLY what it sounds like.  Essentially, there is zero, none, zilch contact made when striking using this style.  Watch about 99% of John Cena’s matches, and you’ll have an EXCELLENT example of what whiffing looks like in a match.

Essentially the polar opposite of whiffing, as “throwing potatoes” is a long-used slang term for striking with (or without) the intention of making forceful contact. It’s the WORST way to work (unless you have to defend yourself with a reckless worker), as many try to be more realistic at the risk of things becoming dangerous. Exhibit 1-100: most matches featuring Big Van Vader and Ken Shamrock.

The ideal, perfect strike requires some solid (but not stiff) contact, a few extra theater tricks and for the recipient to sell it. Take this punch from Big Show to Brad Maddox. P-E-R-F-E-C-T. The selling elevates the realism of the blow, and lessens the need for the aggressor to deliver a hard strike.  Plus, giving the illusion of a loud punch or kick helps too — i.e., pounding one’s boots onto the canvas to make a loud sound just as a punch lands(like most wrestler’s do) or slapping one’s thigh as a kick hits its mark punctuates a strike that isn’t full-on (see EVERY match The Rock ever worked).