Whether it’s as Paul Heyman or Paul E. Dangerously, as the boss of ECW, Brock Lesnar’s agent or the manager of any other wrestler, you’d have to admit that Paul Heyman is one of the most captivating wrestling characters of all time. Few people in the business are blessed with the ability to deliver a promo that simply captivates an audience, but Heyman is definitely one of them, because when he talks, we listen. Heyman has been in the business for over 25 years, and I’ve come across my three favorite iconic wrestling promos from the “Mr. Dangerously” himself, ranging from insulting the crowd, other wrestlers or his employer, Heyman’s verbal venom often knows no bounds.

The Repeated “My Client Ended the Undertaker’s Streak”

Even placing this in my list if difficult and painful (for reasons explained here), but you can’t doubt Paul Heyman’s impact on the greatest upset in WrestleMania history, as his client Brock Lesnar ended The Undertaker’s streak at WrestleMania XXX. The look on Heyman’s face after Lesnar scored the winning pinfall was PRICELESS, and it easily set up a promo for the ages for Heyman to deliver on RAW the following night. The promo was 10 minutes of magic, as Heyman made disparaging references to Vince McMahon, The Undertaker and the whole “bunch of wannabes”  WWE locker room (which drew great applause from the in-house crowd). Plus, to put over Brock’s viciousness, Heyman even ridiculed himself to put some major heat on Brock, saying “he barely tolerates me” . Now, for funsies: did you know that Heyman’s client Brock Lesnar is the one in 21-1? I thought you did.

The 2006 edition of ECW One Night Stand is one of my favorite and most memorable WWE pay-per-views in recent years (along with many other fans and experts), mainly for Rob Van Dam’s victory over John Cena. However one year before, Paul Heyman cut one of his best promos, verbally dismantling several Raw and SmackDown Superstars in a vicious tirade. He ripped into Eric Bischoff failure with WCW, told the crowd to “hide their wives” before introducing Edge, and told John Bradshaw Layfield that the sole reason he was WWE Champion for a year was because “Triple H didn’t want to work Tuesdays.” Heyman had the crowd in the palm of his hands throughout the whole promo, and BOY was it magical! 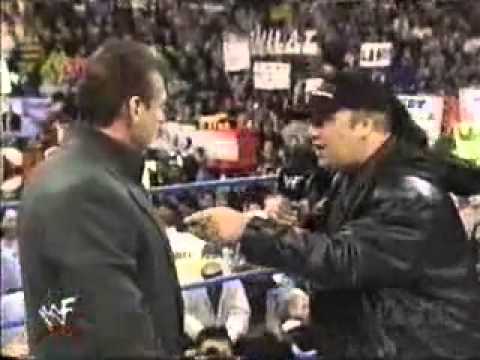 Wow; I don’t think any of Heyman’s promos could have been more vicious and emotional than this one.  During the buildup to The Alliance vs. WWE “Winner Takes All” match at the 2001 Survivor Series, Heyman and Vince McMahon had an in-ring face-off to give the big match one last push, and guess what: it definitely worked. Heyman took a no-holds-barred approach to the promo, as he went past the current storyline by letting loose and ripping on McMahon for ECW’s downfall, accused McMahon’s most loyal employees and his children of wanting him to “burn in hell,” as well as some cheap jabs at McMahon’s failed projects — remember the XFL? If so, you get it; if not, point proven. Heyman was emotional throughout the whole promo, making it one of the most iconic promos of in the history of professional wrestling (much like THIS one).