Remember when I talked about professional wrestling possibly being the greatest form of performance art in world? Well if not, click this link; if so, then here’s an example of the performance art of professional wrestling.  On April 12th, 2003, Ring of Honor (ROH) hosted their event, “The Epic Encounter,” and in what is probably the match that stole the show, Bryan Danielson (now known as Daniel Bryan in the WWE) took on Paul London in a physically grueling Two-Out-Of-Three-Falls match. Oh boy, it’s QUITE a watch….and is an AWESOME match! 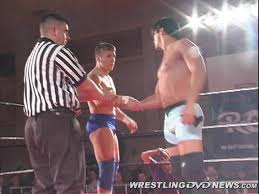 A two out of three falls match is a series of three matches (at the most), in which wrestlers (whether one-on-one or two teams) attempt to win two decisions in that series of matches.  This match type derives from the origins of professional wrestling itself. In the early professional bouts before the 1920’s, most of which were shoots (real fights) rather than worked bouts (scripted), were decided by this method, with one fall being fought in the Greco-Roman style, and the other fall in the catch-as-catch-can freestyle-type style. Should the match ever get to the point of a third fall, the winner was determined by a coin toss.