On January 11 2013, WWE.com announced that Mick Foley would be inducted into the WWE Hall of Fame on April 6, 2013 in New York City –the night before WrestleMania XXIX — and would be inducted by his long time friend Terry Funk.  During his induction speech, Foley talked about his days in the gym (which he admitted that not a lot of working out took place), how his family learned through his mannerisms when he was thinking about a promo, and his biggest regret in his professional wrestling career: the fact that he never…EVAAAAAAAAAAR…pinned Chris Jericho.

As the story about Foley never pinning Jericho kept going, Jericho decided to climb onto the stage (suit and all) and lies down for Foley. Soon afterward, CM Punk too climbed onto the stage (sporting a bald head and a suit, making him almost unrecognizable) to act a the referee. Foley at first contemplated whether or not to drop an elbow on Jericho, stating that he didn’t know if he could physically pull it off without hurting himself. Soon, as Foley gingerly walked toward a lying Jericho, at the last possible second, Foley dropped an elbow on Jericho and Punk broke kayfabe and make the three count. I love Chris Jericho for coming back to put over new, rising talent, and NOW he’s even putting guys over at the Hall of Fame. After the three count, Foley yells to his wife, “Yo Adrian, I did it!” 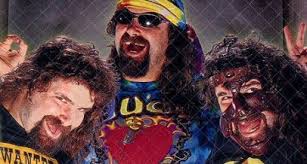