SUmmer’s almost here, and CMT is about to debut a new reality competition series, “Steve Austin’s Broken Skull Challenge” on Sunday, July 6th at 9-10pm ET/PT, created and hosted by — you guessed it — WWE Legend and Hall of Famer, ‘Stone Cold’ Steve Austin!  Each episode of the show will pit eight contestants (with elite athletes against everyday men and women) in the strenuous head-to-head tests of strength, stamina and will until the last man or woman standing earns the opportunity to tackle the toughest obstacle course in America — created by Austin himself — called the “Skullbuster,” for a chance to win some cold, hard CA$H! 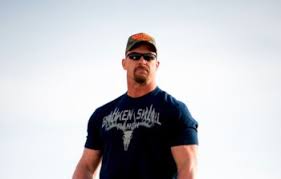 Austin previously hosted three seasons of another reality show on CMT, “Redneck Island,” and the “Broken Skull Challenge” combines the Rattlesnakes love for physical competition with extreme challenges similar to CrossFit and Spartan Race. The first episode feature the Trench Warfare, Pulverizer and Junkyard challenges, as eight men battle to win, because if they lose, they leave until there is only one athlete left to take on the Skullbuster. Austin’s half-mile “Skullbuster” features 10 obstacles designed to stop and physically break down ANY competitor, and yes, the women will find themselves subject to the EXACT SAME punishment as the men.

For funsies, here’s an old-school picture of Austin with “The Heartbreak Kid” Shawn Michaels. You’re welcome.