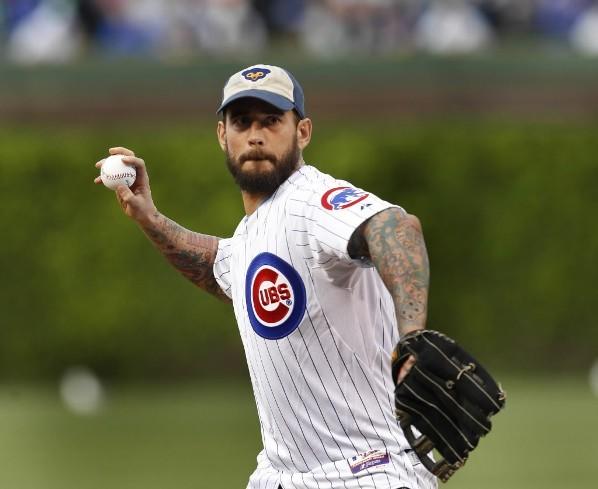 Red Eye Chicago interviewed former WWE Champion CM Punk as he was taking part in the commemoration of Kerry Wood’s 20 strikeout games in 1998. He was asked about whether or not it pitching 20 strikeout games was more impressive than holding the WWE Championship for 434 days. Punk fielded that question, stating that Wood’s would have to answer that and noting that he felt that it was the most impressively pitched game in major league history. Of course, one of the following questions was regarding his status as an active member of the WWE roster, to which the Straight-Edge Superstar indeed confirmed that at the age of 35, he is actively retired from professional wrestling.

Punk was asked about being retired at 35 and if he would be doing more charity work now. The Second City Saint admitted that “it feels good,” and went on to discuss his activities involving supporting charities for organizations such as the Chicago Cubs.  “I get to do fun stuff like bowl and paint chairs and play whiffle ball with Bull Murray,” Punk stated. “It was super fun and for a great cause. You’ve got athletes and actresses and musicians and all kinds of people painting chairs. I’m super happy to be a part of it.”

Punk was also one of several celebrities that took part in painting and decorating 50 custom-made pairs of ball park chairs at Wrigley Field as part of a public art project commemorating the stadium’s 100-year anniversary. The ball park seats, that collectively depict a historic moment in the Chicago ballpark’s history, went on to line-up along Michigan Ave, and will stay through the summer and will later be auctioned online. Punk was one many celebrities that took part in the project of painting the seats, along with actor Vince Vaughn and Chicago Bears tight end (and former Fightin’ Texas Aggie) Martellus Bennett.

*SIDENOTE: CM Punk made a bet with LA Kings’ mascot Bailey, that if LA defeated the Chicago Blackhawks in the NHL Western Conference Finals, Punk would wear a Kings jersey at the United Center, home of the Blackhawks. Punk made good on his bet and tweeted the following picture:

.@BaileyLAKings A bet is a bet, lion. Thanks for the sweater? Congrats to the western conference champions @LAKings pic.twitter.com/9K5nxnc019

He sure is a man of his word.

One thought on “CM Punk’s Activities Post-Retirement from WWE (yes, you read that right…)”