With the news coming from San Diego Comic-Con that Capcom would be releasing an update/remake/HD-ified/something of the classic “Strider” series sometime next year, my brain was immediately hit with memories of playing the port of “Strider” on the Sega Genesis that belonged to a close friend. Years later when I repurchased a Genesis, I found and bought a boxed version of “Strider” for the Genesis (sans instruction manual), and spent hours replaying the classic from my childhood. P.S., I know there’s a NES port, but it was terrible, especially compared to the Genesis port ; the Genesis version was the EGM Video Game of the YEAR in 1990! Point. Proven!

“Strider” was originally an arcade game developed and released by Capcom in 1989. The story takes place in a dystopian future in the year 2048, where the world is ruled by a mysterious dictator known simply as the “Grandmaster”. Strider Hiryu, the youngest member of the Super A Ranked organization of high-tech ninja-like agents called “Striders”, is assigned to assassinate the Grandmaster, alone. Hiryu’s mission started by infiltrating the Grandmaster’s capital at the (really REAL; until 1991) Kazakh Soviet Socialist Republic. The Genesis/Mega Drive version was released in Japan on September 29, 1990, later released in North America and PAL regions, where it was advertised as the one of the first 8-MEGABIT cartridges for the system! 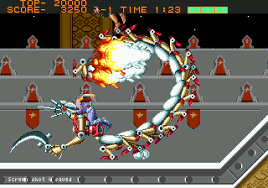 While I never had the pleasure of playing the arcade version, my first memory of the Genesis version was definitely the plasma sword that JUST DESTROYED EVERYTHING!  I also enjoyed how acrobatic Hiryu was (from the regular vertical jump to the cartwheel jump), and how he was able to walk-on walls and ceilings and be able to power slide around the stages.  The boss fights were EXTREMELY fun, mainly because the bosses themselves were large, mechanical beasts.  One boss I vaguely recall was the entire Senate of the KSSR transforming into a giant snake-and-or-centipede-like thing-a-ma-bob! Yes; that is a word.

I can’t wait until “Strider HD” comes out, but until then…..I’m going to go play me some RIGHT NOW!

One thought on “Memories of ‘Strider’ on Sega Genesis!”