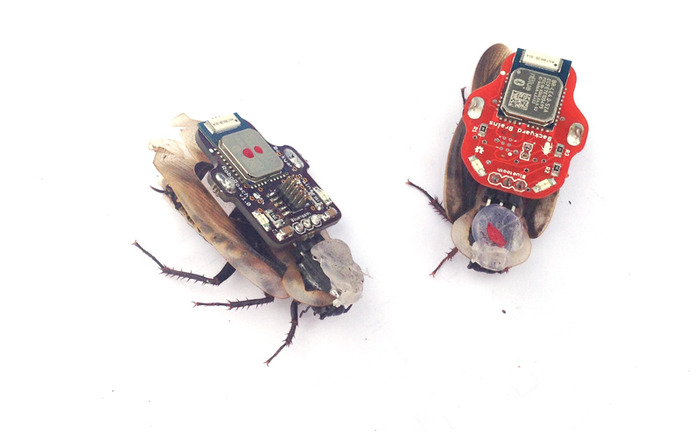 This totally reminds me of the parasitic mushrooms that would inspire the multiple antagonists in the PlayStation 3 exclusive “The Last of Us”! The RoboRoach is a system that takes a real live cockroach — under an anesthetic — attach wires to their antennas from a special lightweight backpack, and control them like an RC car via a smartphone app.  The project, created by University of Michigan grads Greg Gage and Tim Marzullo — both with neuroscience backgrounds —  as they wanted to show students what brain spiking activity actually looks like with the use of some off-the-shelf electronic devices.

Essentially, that tiny special lightweight backpack Gage and Marzullo developed sends pulses to the antenna, causing the roach to think there’s a barrier on a particular side, so it turns another direction. A smartphone app is connected via Bluetooth to the backpack, and the human user is able to maneuver the cockroach wherever (pretty much). Gage and Marzullo’s Backyard Brains startup is using Kickstarter to raise money to develop more fine-tuned, affordable, power-efficient prototypes, and will manufacture RoboRoach’s hardware by hand in an Ann Arbor hacker space. They recently presented the project at the TEDGlobal conference in Edinburgh. The creators say that they hope the RoboRoach begins a resurgence/interest in neurological research and that it’s strictly a learning tool, not a toy.  Gage and Marzullo stated:

”We want to create neural interfaces that the general public can use. Typically, to understand how these hardware devices and biological interfaces work, you’d have to go to graduate school in a neuro-engineering lab.”

One thought on “Cyborg Cockroach Controlled By Phone”