Last Thursday, May 23rd 2013, marks the 14-year anniversary of the tragic passing of pro wrestler Owen Hart. He died on May 23, 1999 after an equipment malfunction during his entrance from the arena’s rafters at the Over the Edge pay-per-view from the Kemper Arena in Kansas City, Missouri.  Hart was a 1-time USWA Unified World Heavyweight Champion — during its partnership with the WWF –, a 2-time WWF Intercontinental Champion, 1-time IWGP Junior Heavyweight Champion, 1-time WWF European Champion and 4-time WWF World Tag Team Champion. Hart also the won the 1994 WWF King of the Ring tournament, and although he never won the WWF Championship, He not only challenged for the title, but he headlined multiple WWF pay-per-view events in the 1990s.

The night after the tragic incident, the WWF renamed that live episode of Monday night RAW as “RAW is Owen” from the Kiel Center in St. Louis, MO. The show started with all the wrestlers, managers, referees and agents of the WWF standing on the entrance ramp as announcer Howard Finkel called for a 10-bell salute. The show featured emotional, heartfelt and unscripted interviews from the WWF wrestlers as all storylines and rivalries were put aside for the night, and the wrestlers had permission whether to work or not. RAW is Owen featured ten matches and the show ended with “Stone Cold” Steve Austin climbing the turnbuckle,  performing his famous beer guzzling routine, and finally leaving one beer in the center of the ring ‘for Owen’. 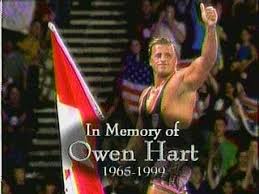 “my life has forever changed after losing you Owen, it’s been an incredibly sad and lonesome world without you and it surely can’t be fair that heaven is echoing in laughter at all the pranks being pulled on the rest of the Angels …. and all of us here on earth are left with just our memories.”