I remember my summer days as a youth: sleeping late during the week, playing outside (after being told to go outside while watching TV and playing video games, of course), going to the coast to check out the beach, and the fireworks on the Fourth of July.  As a young wrestling fan, the months of June through August had three summer-themed pay-per-views to watch for my viewing pleasure.  While SummerSlam was WWE’s only summer-themed PPV, WCW had two, back-to-back, summer-themed pay-per-views: The Great American Back in June and Bash At The Beach in July. 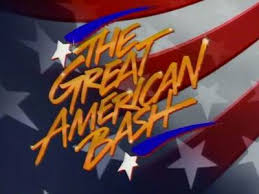 The Great American Bash was originally produced by Jim Crockett Promotions under the umbrella of the National Wrestling Alliance from 1985 — when I was 4 MONTHS old — until 1990 –when I was 5 years old. World Championship Wrestling took over in 1991 until being bought-out by WWE in 2001, and WWE continued the pay-per-view event from 2004 to 2009, with a one-time themed event on an episode of SmackDown in 2012. According to Ric Flair’s autobiography, To Be the Man, Dusty Rhodes invented the concept of The Great American Bash (much like he did with Starrcade).  Jim Crockett Promotions (JCP) used The Great American Bash as the name of a tour that presented several PPV-calibur supershows held nationwide.  In 1986, there were 13 Great American Bashes and at each one, NWA World Heavyweight Champion Ric Flair defended the belt successfully against: Ricky Morton, Road Warrior Hawk, Ron Garvin, Nikita Koloff, Robert Gibson, Road Warrior Animal, Magnum T.A., Wahoo McDaniel and Dusty Rhodes.  The cities that hosted The Great American Bash in 1986 were : Philadelphia, Washington, D.C., Memphis, Charlotte, Cincinnati, Charleston, WV, Jacksonville, Richmond, Fayetteville, NC,  Johnson City, TN, Norfolk, Greensboro, NC and Atlanta.

The Bash at the Beach (formerly called “Beach Blast” in June of 1992 & 1993) was the July event produced by WCW from 1994 to 2000. The event followed a “fun-in-the-sun” beach theme (well…DUUUHHHHH), as the entrance area was decorated with surfboards, beach balls and sand.  Bash at the Beach was also set in locales known for beaches and warm summer weather, as all the shows took place in either Florida or California. The event served as a WCW’s response to WWF’s August event SummerSlam, and was later moved to July for its flagship summertime extravaganza, The Great American Bash to be held in June. Bash at the Beach was the site of 2 personal special moments of mine: Hulk Hogan revealing himself as the leader of the New World Order in 1996, and Booker T’s surprise World Heavyweight title match and WIN over Jeff Jarrett in 2000. The event was considered one of WCW’s flagship pay-per-view events along with Starrcade, SuperBrawl, The Great American Bash, and Halloween Havoc.

One thought on “WCW’s Summertime Blues: The Great American Bash & Bash At The Beach”