It’s no secret of surprise that many talented personalities in professional wrestling has competed in multiple organizations; that’s just the nature of the business, or ANY business for that matter.  Some wrestlers get their start in one company and become extremely popular for the next one they work for. Some start off popular in one and then fizzle out in the next, while some become a huge star in one and continue being top tier talent in the next company.  WWE.com has complied a list of 15 WWE Superstars who used to compete in WCW that may have not been of the knowledge of its common fans. Many of us already know of Triple H’s run in WCW as Paul Levesque, The Undertaker as “Mean” Mark Callous (get it?), and even Barry Horowitz, considered as one of the hardest working men in the business, but here are 5 particular superstars that personally escaped my own mind.

SABU: I remember Sabu getting fired (publicly, for that matter) from ECW due to not honoring his scheduling commitments  but I was unaware that he competed in Ted Turner’s “wrasslin'” company during his hiatus. It didn’t last too long though, as Sabu’s aggressive and extreme athleticism was too much for WCW and they released him soon afterward and he returned to ECW. 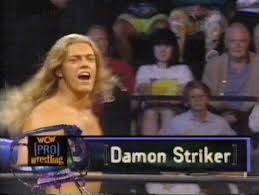 EDGE: This one surprised me! Apparently, Edge (as Damon Striker) wrestled in two televised matches on WCW Pro in 1996. He lost both matches to Kevin Sullivan and Meng. In 1997, he debuted in WWE and the rest is history.

THE IRON SHEIK  Ah yes, most of us remember the storyline from the 1980’s and 90’s, as well as his brief run with the WWE Championship before dropping it to Hulk Hogan (thus kicking off Hulkamania), but the Sheik also made a splash in WCW. He challenged Sting for the NWA/WCW TV Title in 1989, and after losing, he returned to WWE.

RHYNO: Rhyno made his major organization debut with WCW in August of 1995 when he wrestled “Hacksaw” Jim Duggan in a losing effort on an episode of WCW Saturday Night. Though he competed under the name Terry Richards, his future run of gore-ing through the competition to the ECW TV and World Heavyweight titles weren’t too far ahead.

ZEUS: Dang it, you’ve caught me thinly-veiled attempt to mask my fandom for the Hulk Hogan vehicle No Holds Barred (well, not really; I did write a WHOLE feature on the film). After failing to best Hogan in film and in a WWE ring, Zeus (renamed Z-Gangsta) came to WCW in 1996 as part of a Four Horsemen/Dungeon of Doom alliance to end Hulkamania through WCW. Competing against Hogan and “Macho Man” Randy Savage in a Tower of Doom Match at Uncensored 1996, Zeus again failed to best Hogan and disappeared from the WCW quickly.

3 thoughts on “The WWE Superstars with A ‘Secret’ WCW Past”