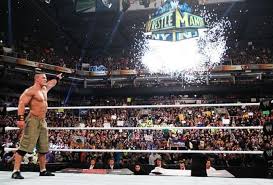 Congratulations to John Cena for winning the 2013 Royal Rumble (becoming the 4th to win the event twice — first time in 2008) and punching his ticket to a World Championship match at WrestleMania XXIX!  For the unfamiliar, the Royal Rumble is the WWE’s annual pay-per-view event produced every January since 1988, in which the event’s main feature is the “Royal Rumble match.”  The match is based on the classic Battle Royal match, in which a number of wrestlers enter the ring at certain time intervals (after 2 wrestlers begin the match) with the goal of eliminating their competitors by tossing them over the top rope, with both feet touching the floor. The winner of the event is the last wrestler remaining after all others have been eliminated, and that wrestler gets a world title shot at WrestleMania.  The WWE recently put up a “By The Numbers” video accounting for several interesting historic and information tidbits on the Royal Rumble, the participants, and stories in the events lineage.  Check out the video after the break!

2 thoughts on “The WWE Royal Rumble: By The Numbers!”