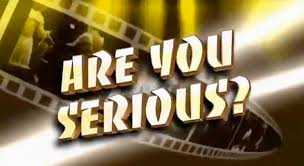 Remember that terrible wresting gimmick on an old episode of WCW Nitro? How about that dreadful match on RAW that you wish would just be over with so the show could just move on? Congratulations (or Sorry) if you do, but don’t worry; you are not alone. “The Road Dogg” Jesse James and Josh Mathews host the World Wrestling Entertainment (WWE) web series “Are You Serious?,” taking place from “underneath Titan Towers” (the WWE’s world headquarters) featuring some of the most appalling, unpleasant and dreadful clips in the WWE history. The duo are also known on the show for taking shots at World Championship Wrestling (with the Twitter trending hashtag #WCWRuinsEverything), the internet wrestling community (or IWC), silly vignettes and botched moves and spots during matches (referred to as “Garbage Juice”), and wrestlers that had very short stints in the WWE. Enjoy the most recent episode of “Are You Serious” after the break!

One thought on “WWE’s “Are You Serious”; Recalling the Best of the Worst…”