What do you think of when you hear the name Andrea Palladio? No who understands architectural history can answer.  OK, you can answer; better yet, I’ll answer.  Palladio — himself influenced by Roman and Greek architecture– was an Italian architect who is often widely regarded as the father of Western architecture.  His style, design influence, and teachings are summarized in his architectural treatise, The Four Books of Architecture, which gained him wide recognition. Palladio’s impact reached beyond typical locations, as this exhibit — “Genealogies” by photographer Max Belcher — points out at the newly-renovated Palladio Museum.  Some examples of the Italian architect’s encroaching influence includes the homes built by freed American slaves upon returning to Africa.

Belcher’s photographs showcase how the local African vernacular, materials, and construction techniques resemble the white gables and columns from the neoclassical style Palladio was well-known for.  In ancient Rome, Vitruvius used the pitched wooden hut as a model to shape the temple in stone, and that triangular pediment from most temples was then incorporated by Palladio in his villa designs during the Renaissance.  Back in the first half of the 1800’s, a number of various philanthropic organizations in North America assisted the newly freed African-Americans return to their homeland of Liberia. Inspired by the square-planned building with porches, columns, and gables from the neo-Palladian mansions from American plantations, the freed slaves turned away the desire of the local circular-style native homes.  It resulted in turning traditional African dwellings into newly translated and reinterpreted works of neoclassical architecture.

Photographer Max Belcher’s exhibit, ”Genealogies,” is on view at the Palladio Museum until March 31, 2013. 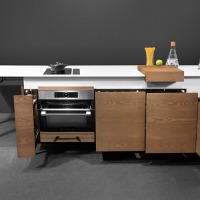